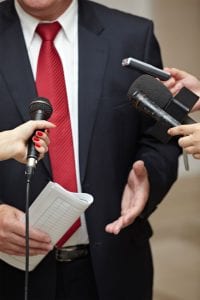 Nothing destroys reputation faster than an issue or crisis mismanaged, and new research reinforces that CEO performance and leadership is critical in determining reputation.

This data may seem encouraging, and an endorsement of strong leadership. But it also highlights just how potentially vulnerable companies are when things go wrong. In the world of crisis management, this is very much a two-edged sword.

Effective leadership in a crisis can protect and even enhance reputation.

But it doesn’t happen too often, so you have to go back to 2014 to find AirAsia CEO Tony Fernandes after one of his aircraft crashed into the sea off Indonesia. He stepped up, took control and famously said: “I am the leader of the company. I take responsibility. The passengers were on my aircraft and I have to take responsibility for that.”   PR Week concluded: “AirAsia CEO Tony Fernandes has given a lesson in crisis management.”

The downside of the leadership equation is that poor management in a crisis can severely damage reputation, and sadly that happens far more often…

Think of Australia’s Chief Statistician David Kalicsh following the ABS census debacle. There was widespread public discussion about whether he should be dismissed, and even a prediction that after a few months he would be quietly allowed to resign.

Or consider Heather Bresch, CEO of the pharmaceutical company Mylan, trying to explain why the price of their life-saving epipens had risen from $164 to $608 in five years.  Instead of taking responsibility she blamed the “broken healthcare system” and the costly supply chain, finishing with the tone-deaf statement “No-one’s more frustrated than me.”  Coming from a person whose pay increased by over 670% in her tenure in charge, this response will probably rank as one of the sound-bites from hell.

Sadly, Mr Kalisch and Ms Bresch are not alone on bad apologies when things go wrong.

The Weber Shandwick study revealed that almost half the C-suite executives surveyed (49%) believe that apologies are overused, and more than a quarter (26%) think CEOs in general are rarely or almost never sincere in their apologies.

If one in four company executives don’t believe CEOs, why should the public?

Which brings us to the other downside of the link between the CEO and reputation. Namely when executive misbehavior is the cause of the crisis. Research in the US shows that when arrests, lies or extramarital affairs of CEOs and other top executives are disclosed, their companies suffer serious loss of both reputation and market value. A study of 219 cases of executive indiscretion showed an average shareholder loss of $US226 million in the three days after the revelation.

Furthermore, the researchers found that stock prices of companies of accused executives fell in total between 11% and 14% in the subsequent 12 months. And that firms where executives behaved badly performed poorly overall that year, were more likely to manipulate earnings, be sued by shareholders and be accused of fraud by the government. Worryingly the study also found that 65% of the accused executives kept their jobs, even those with repeat offences.

So when it comes to a crisis, a strong CEO reputation can be a valuable asset. But poor executive performance or behaviour can be a very costly liability.

Tony is a frequent conference presenter on issue and crisis management and has run professional workshops in Australia, New Zealand, the USA and throughout Asia. In addition he is author of the book “Don’t Just Stand There – the Do-it Plan for Effective Issue Management”  He also teaches in the Masters Programme at RMIT University, where he completed his Ph.D. in the field of issue management